Two men and two businesses were sentenced in federal court in Albuquerque last week as part of “Operation Al Zuni.” 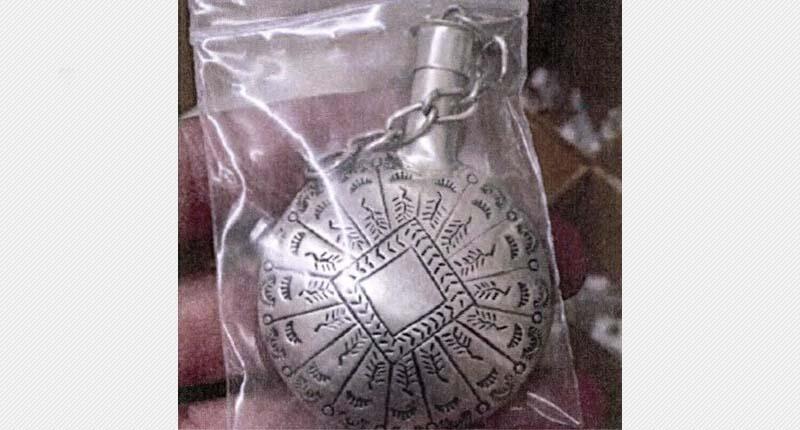 This picture shows one of the miniature canteens made overseas but sold in the United States as an authentic piece of Native American jewelry. The photograph is part of the public record in the case.

Albuquerque, N.M.—Two individuals and two businesses charged in a massive investigation into counterfeit Native American arts and crafts, including jewelry, were sentenced in federal court in Albuquerque on Aug. 26.

According to the U.S. Attorney’s Office in New Mexico, 72-year-old Jawad Khalaf and his brother, 74-year-old Nashat Khalaf, received two years’ supervised release, while Jawad also must perform 100 hours of community service, for mispresenting goods as Native American-produced—in this case, miniature canteens—that were not made by Native Americans.

Both Jawad and Nashat appeared in person in court last week after pleading guilty via video conference in April, said Sean Sullivan, a spokesperson for the U.S. Attorney’s Office in Albuquerque.

Collectively, the defendants will make a $300,000 donation to the Indian Arts and Crafts Board, a federal agency that promotes the economic development of Native Americans through their arts and crafts, and forfeit nearly $290,000 seized by investigators in the case, the U.S. Attorney’s Office said.

That is a violation of the Indian Arts and Crafts Act, a 1990 truth-in-advertising law prohibiting the display and/or sale of any goods—jewelry, rugs, baskets, etc.—in a manner that suggests they are Native American-produced, a Native American product, or the product of a specific individual or tribe if they are not.

Operation Al Zuni was the subject of an extensive report published by National Geographic in March 2018.

The story noted the flood of fakes on the market in the Southwest not only deprive Native Americans of income but, in the words of one Zuni jeweler, feel like a “very deep personal attack” for Native Americans who view arts and crafts as way to stay connected to their culture and history.

Jawad, Nashat, Sterling and Al-Zuni were originally charged in the case in February 2019, along with three other men.

Charges against two of the

In January, National Jeweler reported on guilty pleas entered in another case involving jewelry made in the Philippines but sold all over the U.S. as authentic Native American work.

Sullivan said that case was separate from Operation Al Zuni.

Michelle Graffis the editor-in-chief at National Jeweler, directing the publication’s coverage both online and in print.
More on Crime
CrimeApr 13, 2021
2 Men Plead Guilty in Murder of Texas Jeweler
Brought to you by
A New Golden Age